So I read this article by Suresh Menon, and he makes a number of excellent points. I've rarely gone to the stadium myself, but it also put into my mind the last time I saw a match at the stadium: during IPL 2008, when CSK was playing DC at the MAC. It was one of only two games that DC won in an otherwise sad campaign, and Adam Gilchrist led the way with a nice fifty. I remember how the people around me stood up to applaud when he hit his fiftieth run - I was a little disgruntled, I remember, stubbornly remained sitting until I realised I was the only one in my section of the stadium - and I overheard the couple of guys sitting next to me saying, "it was worth coming here, just to see Gilchrist play like this." It wasn't even a terribly special innings - this was back in the days when CSK's bowling attack was wafer-thin and sucked horribly - but everybody thoroughly enjoyed the game, stayed right till the end, even when it was more than apparent that CSK was losing.

I know it doesn't speak for the majority, and an IPL match doesn't compare to the atmosphere of a proper international match, but I think I might've just felt a little proud of my city then. Just a little.
Fantasised by Maithreyi at 5:32 AM 1 comment: 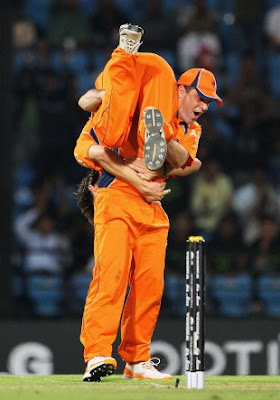 So, okay, I don't really have the Gollum-voice, but you get the picture.

The World Cup's underway, and after the first week that consisted mostly of unremarkable minnow-bashing, people are still yawning and waiting for something good to come up. That might start today; after all, today, we have the Saffers taking on the Windies, and come this weekend, three very interesting matches: Aus v NZ, SL v Pak and, of course, the kicker: Ind v Eng on Sunday.

So: looking back at the first week of the World Cup, the trend seems to be the Test playing nations trampling all over the, uh, "minnow"-teams. The ICC has already decided to trim the participating nations down to ten next year, which means, there's not much scope or incentive in the future for the Associates. But hey, given the ass-whuppin' the Associates got over the past week, 'sall justified, right?

1. India v Bangladesh: look, what's this? 2001? Wake up! Bangladesh aren't minnows anymore: they're minnows with steroids. Force to be taken somewhat seriously, if not entirely reckoned with.

2. Kenya v everybody: I'm sorry. Forget I said anything. For being the semifinalists of the 2003 edition, the African team has been painful to watch this year. I mean, come on, their match against NZ lasted less than the duration of a regular T20 match! And it was in Chennai! And some people had the gall to say that the crowd was very thin for that match. Like I've said, if the circus performers have nothing to offer, the seats ain't gonna fill.

3. Australia v Zimbabwe: On paper, you'd think: yeah, the Zimbabweans did kind of put up a fight in the first innings. Pity they didn't have a better batting line-up. For the unfortunates like me who actually watched it on TV? SNORING AWAY, I TELL YOU. I didn't sign up to watch Shane Watson bat like Rahul Dravid on valium.

4. Sri Lanka v Canada: I have a couple of uncles in Canada. I tell 'em: try out for the Canadian cricket-team. All you need is to be born in the sub-continent, and have a half-way decent knowledge of how to play cricket. All said and done, though, I liked the Canadian team's attitude. They probably looked the most sprightly and enthusiastic of all the Associates thus far.

5. England v Netherlands: This was the one worthwhile match this whole week. I mean, it was pure gold. At first, England's shenanigans on the field, the Pietersen-Anderson gaffe, the Swann drop, the misfielding, negligent field placements - England were losing it. Sure, they won eventually, but Netherlands dragged it till the 49th over, and ten Doeschate was utterly magnificent. A century - AND THEN two wickets? Awesome.

Every match kind of exemplifies what's wrong and wonderful about this format, I think. But, really. Let the real World Cup begin, please?
Fantasised by Maithreyi at 12:42 AM No comments:

Labels: Bangladesh, ODI, the inanity of it all, World Cup 2011, Zimbabwe

Apparently, today was India's first World Cup warm-up game. I have no idea how I wasn't aware of that (except, maybe I do.)

Turns out the following things happened:

1. Collective Batting Fail from the Indians as we slump to 138/8.

2. Pathan and Ashwin (yay!) contribute in propping us to a decent 214.

4. Piyush Chawla picks up a four-fer.

7. The next warm-up is in Chennai.

What in the world is going on, people. Yet another win in this fashion... if anybody needs me, I'll be in that corner trying to recover from whiplash.
Fantasised by Maithreyi at 8:21 AM No comments:

Maithreyi
A medical student who, according to everybody who knows better than her, should NOT be obsessing with cricket and randomly fangirling its players, but hey. It's a free world, right? Loyal Chennai-ite and hardcore MSD fangirl to boot.

Oh, and watch out for my Mad Random Capitalisation Skillz.

In case you're a) feeling bored b)feeling really young or c) both, do feel free to check out my attempts at fiction based on stuff I obsess over other than cricket: